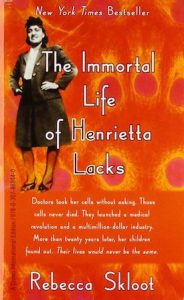 The Immortal Life of Henrietta Lacks

A Memoir of Loss and Hope

A subtitle for this book could be: “The birth of HeLa and the death of Henrietta Lacks.” It takes the reader on a rollercoaster ride covering fifty years and it is based on facts.The author is Rebecca Skloot and this is her prize-winning work. She is introduced as a science writer, and her investigation into the background of Henrietta Lacks’ cells “that never died” is a nonfiction book. But for the non-scientifically trained, non-medical layperson, the writer takes the reader into realms of storytelling which make it riveting reading throughout. Her investigation into the scientific discovery that HeLa cells continue to live forever, combined with the cultural background of the unsuspecting donor, casts a spell which goes far beyond the history of cell culture development. And it takes us back to Jim Crow.

Henrietta Lacks was a poor tobacco farmer who died of cancer in 1951. To their utter amazement, researchers at Johns Hopkins Hospital in Baltimore discovered that the cells taken from her cervical tumor remained alive and continued to reproduce. They were given a name, HeLa. They are alive in test tubes to this day, and continue to be sold around the world for science and medical research. Henrietta’s family didn’t find out about the miracle discovery until some 20 years later.

Henrietta was married to a cousin and had five young children when she died in her early 30s. She came from a large family, descendants of slaves who were growing tobacco in Clover, Virginia. After her death, nobody in her family were told about the medical research and the HeLa cells that became famous. Nobody had been asked for permission to use the cells in experiments. Almost by chance the family found out about the billions of Henrietta’s cells that continue to be traded around the world to this day.

Rebecca Skloot spent ten years researching and writing the book. Not only did she do a thorough investigation of the history of cell culture developments and the mystery of cells and genetic engineering, but she committed herself to learning about the background of Henrietta Lacks. It took her a long time to earn the trust of family members to meet with them and to obtain interviews. There was strong resistance to share the little information they had with a white person, because they felt betrayed by the medical establishments of the time.

Skloot writes about their impoverished community, where many members have not gone beyond a primary school education, in an attentive, detailed, nonjudgmental way. She has listened to them with care. Skloot picks up the subtlety of African American English and the physical presence of her interviewees without prejudice. She quotes them verbatim, the way they talked into her tape recorder: “Nobody round here never understood how she dead and that thing still livin.”

And because of the heartbreaking family history which Skloot manages to uncover, layer by layer, much of the book deals with the confusion, misconceptions and anger experienced by Henrietta’s adult children and their community. They blame Johns Hopkins, the scientists and medical practitioners, some who had lied to them, and who had been involved for decades in medical research – because they failed to explain and inform how they used Henrietta’s cells. They cannot understand why Henrietta’s cells have become a billion dollar business while her children and her extended family are too poor to buy health insurance.

Henrietta’s adult children try to understand the mysteries of cell divisions, and the complexity of genetic engineering. What is the link between the “birth of HeLa” and the “death of Henrietta Lacks”? Maybe Henrietta is still alive somewhere, as a clone? Rumours abound. “They named them HeLa! And they still livin…”.

The author takes care to explore the history of research at Johns Hopkins, and the politics of the time. She tells about unethical studies and deceptive testing which were widespread, to benefit the research of doctors and laboratories. Among others, cancer cells were injected into patients while the information was withheld from them. Informed consent of patients was not legally required during those years. The Nuremberg Code was not widely known by young doctors when they graduated from medical schools decades later. Is it possible that hundreds of unethical studies had been conducted by top scientists working on cell culture?

One of the main protagonists in the book is Henrietta’s daughter Deborah who is determined to find out the truth of what happened, when and why her mother died soon after she was born. It takes years, but with the author’s encouragement and support, she learns about her mother’s and her own past, about a sister who disappeared, about the mystery of cells. Overcoming her own despair and grief, she manages to calm the violence still seething in her brothers after fifty years, who want to seek revenge, who want to sue Johns Hopkins.

Despite being warned that “…sometimes learning can be just as painful as not knowing”, she perseveres in her search. After seeing evidence about her mother’s cells in a laboratory, and obtaining a few long lost documents and a photo from archives, when she finally knows much of what had been hidden, she seems at peace: “…if you gonna go into history you can’t do it with a hate attitude. You got to remember times was different.”

I recommend this book unreservedly.